Castration can be performed in horses under general anaesthesia or under sedation with the horse standing. Complications are uncommon but can include excessive bleeding, infection and swelling.

Standing castration is performed much less commonly  and carries an increased risk for the safety of the veterinarian, handler and  horse.   The cord is not sutured and there is a small risk associated with evisceration of bowel through the incision and post-operative haemmorhage. 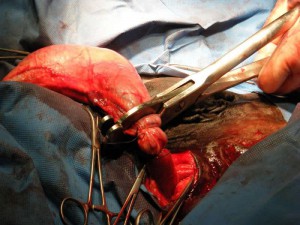 At Gold Coast Equine Clinic, we prefer to perform castration under general anaesthesia in the clean, safe environment of our padded recovery room. Horses are anaesthetised and each testicle is removed after ligation (tying-off) of each spermatic cord which eliminates the chance of the horse eviscerating (prolapsing bowel through the incision). This technique seems to result in less post-operative complications such as swelling and local infection than when performed  standing or in the paddock. The incisions are left open to heal by second intention and the horse is encouraged to exercise each day to promote drainage. Usually the skin heals in around 14-21 days and the horse is administered antibiotics and bute (anti-inflammatory medication) for 3 days or so.

Owners sometimes do not wish to have an open castration incision to care for post-operatively. In these horses, we recommend performing castration under general anaesthesia at GCEC in our sterile surgical suite.   With this method each testicle is removed from an inguinal (groin) approach and the incisions are closed with absorbable suture. These horses are typically kept quiet in a stall or small yard for 7 days before resuming work. Occasionally we encounter mild swelling around the incision which usually resolves uneventfully. Haemorrhage can occasionally occur which may need to be drained. 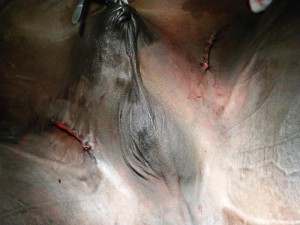 The bottom line is that there are multiple methods to castrate horses. Each technique outlined above is considered a routine procedure although all carry a small risk of complications which can vary from a minor inconvenience to a catastrophic event such as bowel evisceration. Please discuss these methods with any of our veterinarians who will help you to choose the best method of castration for your horse.